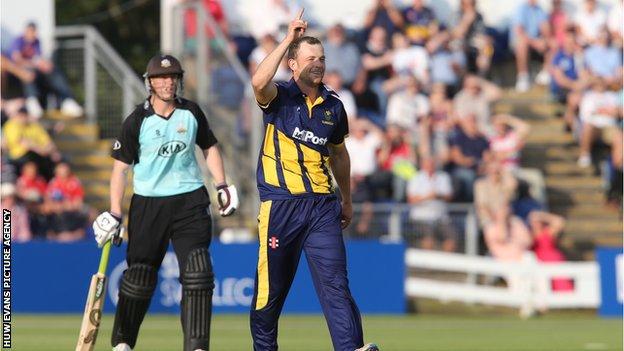 Glamorgan will have Graham Wagg fit to bowl again in their final T20 Blast group game against Gloucestershire.

Wagg played as a batsman only last week as he returned following a side strain, but will add his bowling to Glamorgan's attack in their must-win game.

"He had a good bowl in a second team match and is fit - he'll do a good job for us," said coach Toby Radford.

Victory over Gloucestershire in Cardiff will guarantee a quarter-final spot for Glamorgan, probably against Lancashire.

Seamer Will Owen has been left out of the 13-man squad and will be replaced by a batsman.

There are three players in contention to stiffen Glamorgan's batting line-up - David Lloyd, who hit a double century for the second team this week, Ben Wright or teenager Aneurin Donald.

"There's potential to get into a quarter final so it's a huge match for us," added Radford.

"We started well in this competition but have fallen off a bit, it would be nice to see it through."

Radford believes away wins over Surrey, Middlesex, Hampshire and Somerset prove that Glamorgan can be serious contenders.

He added he would be checking the availability of West Indies all-rounder Darren Sammy if Glamorgan qualify for the knockout stages.

and says he would call West Indian all-rounder Darren Sammy

"It will be down to his availability, but potentially for quarter finals or even finals day, then I'll be giving him a call and saying 'get yourself over here'," added Radford.