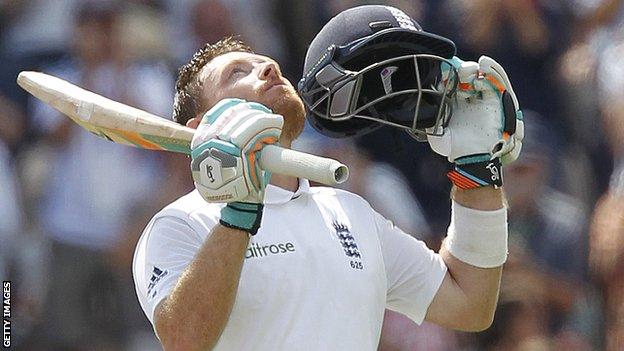 England batsman Ian Bell dedicated his return to form to the memory of his grandfather William, who died earlier this month.

Bell scored his first Test century in almost a year to lead England to 569-7 declared on the second day of the third Test against India, who closed on 25-1.

"It was for him. He was a massive influence on my cricket," said Bell.

"He took me to cricket when mum and dad were at work. You need helpful family to get you to all those junior games."

Bell had gone 19 innings without a Test century, a run dating back to the fourth Test of last year's Ashes, in which time he had managed only 476 runs at an of 26.44.

But, after surviving an lbw appeal that should have gone against him on nought, the Warwickshire right-hander struck 167, his 21st Test hundred.

"I knew I was out lbw on nought, but never mind," said the 32-year-old. "I feel like I've been playing well, having starts but not going on. It's nice to go through and get a big hundred."

Bell shared century stands with Gary Ballance, who made 156, and Jos Buttler, who sparkled on debut with 85 from 83 balls.

"He was outstanding," said Bell. "If we lay the platforms for Jos to come in and play his game, then he can get us into match-winning positions."

England removed India opener Shikhar Dhawan late in the day, but must still find a way to take 19 more wickets on a good batting pitch if they are to level the series at 1-1.

"We are going to have to work hard, because it is a very good Test wicket," said Bell. "There's a bit of spin starting to happen now, which should encourage Moeen Ali, and the ball has swung over the first two days, which is a good sign for us."