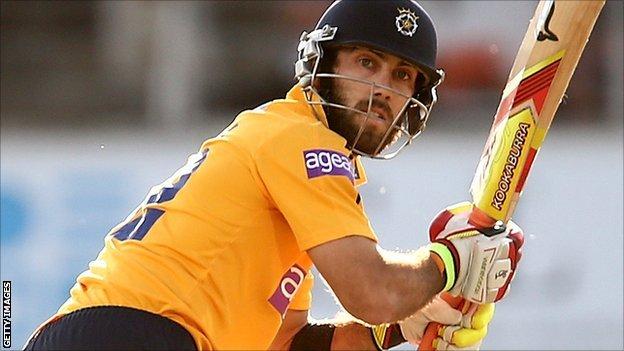 Australia all-rounder Glenn Maxwell says he hopes to return to Hampshire next year as an overseas player.

Maxwell has confirmed Sunday's T20 Blast quarter-final at Nottinghamshire will be his last game this summer.

The 25-year-old will then join up with Australia for a training camp before their subsequent one-day series with Zimbabwe and South Africa.

"I'll be chatting to the coaching group again to get back because I love this place," Maxwell told BBC Radio Solent.

Maxwell returned to the Ageas Bowl in June for a second spell having first played for Hampshire in 2012, with his impressive form leading to limited-overs international honours.

He also became the first $1m player in the Indian Premier League and scored 552 runs in this year's competition with a strike-rate of 187.75.

"I know I have so much more to offer these guys," added Maxwell.

"Hampshire have helped me in a beautiful way. They started my career before international cricket.

"I didn't think I was close but they turned me into an international cricketer so I still owe them a heap and I would love to come back next year and in future years."

On Sunday Maxwell hit his highest one-day score as Hampshire hammered Lancashire by 148 runs in the One-Day Cup.

He struck 146 off 96 balls, including 22 fours and two sixes and admitted he has been guilty of trying too hard during his current spell with the county.

And Maxwell is desperate to end his spell by firing Hampshire to T20 finals day on Sunday.

"It's probably just mindset," he added. "I think I just needed to relax. All I want to do is get the boys to finals day and send them off with a bang."