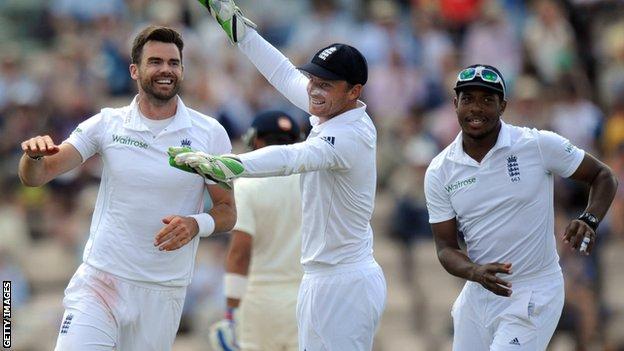 After two days of this third Test in Southampton, we asked if England's bowlers could follow up the achievements of the batsmen.

They have delivered, running in hard and giving it everything to reduce India to 323-8, some 246 adrift of England's 569-7 declared.

So often this summer we have accused England's pace attack of bowling too short or of going overboard with the bouncers delivered from round the wicket by Liam Plunkett.

With Plunkett left out of this side, they have gone back to basics on a full length and reaped the rewards.

As ever, it was James Anderson who caught the eye, with the Lancashire man delivering his best performance of the season so far.

In the second Test defeat at Lord's, Anderson was well below his best, perhaps distracted by the business with Ravindra Jadeja.

Here, he is still resisting the urge to talk to the batsmen, but he has looked like the old Anderson, pitching the ball up and swinging it both ways for his 3-52. His accuracy accounted for Virat Kohli and it must have been sweet to trap Jadeja lbw late in the day.

Stuart Broad wasn't in his customary role of beginning the day in tandem with Anderson - that job went to Chris Woakes - which may just have stoked him up.

When he did come on, Broad bowled with good pace, producing a hostile bouncer to account for Cheteshwar Pujara and having Murali Vijay caught in two minds about whether to play or leave as the Nottinghamshire paceman recorded 3-65.

Woakes also impressed, bowling with more pace than we saw in his debut against Australia at The Oval last summer.

Looking back, that was a very odd Test, so perhaps it is unfair to judge him on that performance. Now he looks more like the cricketer that we are told he can be. He bowled a nice line and was unlucky to go wicketless.

As for Chris Jordan, he will always blow hot and cold because of the way he approaches and hits the crease. It's a strange, going-nowhere run-up, with a big physical effort at the end.

If he had a more controlled run-up, his bowling would be more accurate. Still, he bowls quickly and, alongside his batting and slip catching, we know he has talent.

For as well as the seamers bowled, England were still grateful to the gifts presented to Moeen Ali by Ajinkya Rahane and Rohit Sharma.

For Rohit, on his return to the Test side, to slice the ball straight to mid-off just before tea was disastrous. As a result, you have to question his temperament.

Rahane, who made a century at Lord's and had passed 50 here, would have backed himself to hit a Moeen long hop for four 99 times out of 100. As it was, he got the bottom of the bat, spooned a catch to mid-wicket and gave Moeen a second wicket as a reward for a decent effort.

Now, with India needing 47 more runs to avoid the follow-on, England will ponder overnight what to do if those two final wickets fall quickly on Wednesday morning.

There are plenty of reasons to bowl again, not least the relatively short amount of time left in the game. Yes, it is hot and it has been tough work to get to this position, but Test cricket wins are supposed to be hard-earned.

But, it is easy for us in the media to say that and only England will know about the fitness of the bowlers, in particular Broad and Anderson.

Speaking as an old bowler, when the follow-on is enforced and you don't get a wicket or two in the first half-hour of that second innings, you begin to wonder if you have done the right thing.

Conversely, if you bat again and leave the declaration too late, you end up reflecting on an opportunity missed.

If they do decide to bat again, England will have to get their skates on because there are only six sessions left in this match and they will probably be targeting the final four of those to bowl India out for a second time.

Finally, I should address the situation surrounding Moeen and the pro-Gaza wristbands he wore on day two, because talk of that was dominating a lot of the proceedings on the third morning.

The International Cricket Council handled it well. Moeen was in breach of the rules, but, in a sensitive situation they asked him to desist, rather than handing down a punishment.

Match referee David Boon quite rightly said that Moeen is entitled to make whatever statements he wishes away from the arena.

It's almost impossible to keep sport and politics apart, but every effort should be made to ensure that they are.