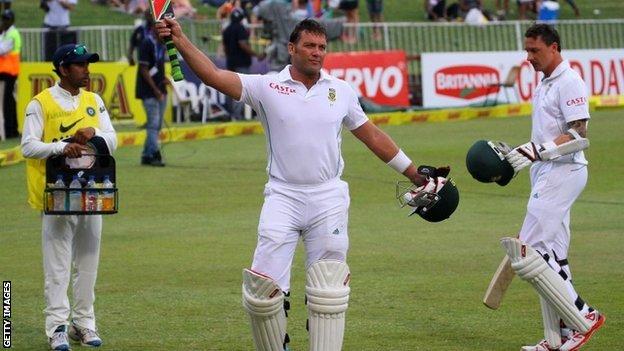 South African cricket great Jacques Kallis has announced his retirement from all forms of international cricket. The following article first appeared in December 2013 when Kallis retired from Test cricket.

It was typical of Jacques Kallis's understated character that he announced his retirement from Test cricket on Christmas Day, guaranteeing minimal fanfare and very little build-up to his final bow.

It was equally typical that he marked the occasion with the sort of composed and authoritative century that established the all-rounder as one of the finest cricketers of his - or any - generation.

Kallis had a prosaic batting style and natural reserve that meant he was rarely talked of in the same bracket as all-time greats such as Don Bradman, Sir Garry Sobers and Sachin Tendulkar. The numbers tell a different story.

Kallis's hundred against India was his 45th in Test cricket, leaving him second only to India legend Tendulkar, whose own departure from the international game in November was preceded by weeks of feverish anticipation and followed by a national outpouring of grief akin to the death of a statesman.

Kallis's final run in his first innings 115 in Durban sneaked him past Rahul Dravid into third on the all-time list of Test run scorers, with only Tendulkar and former Australia captain Ricky Ponting ahead.

His average of 55.37 is superior to that of Dravid, Tendulkar, Ponting and Brian Lara.

But what really places Kallis on a higher plane is his outstanding contribution with the ball.

A natural bowler of away swing, capable of surprising pace and bounce, he has taken 292 Test wickets at an average of 32.65.

West Indies legend Sobers, the player most frequently awarded the title of the greatest all-rounder in the history of the game, averaged 57.78 with the bat in his 93 Tests, but his 235 wickets cost him a shade over 34.

"I think Jacques Kallis has been kept on the backburner because he has not been much of a showman or talked himself up," says former England captain Michael Vaughan. "I don't know of an all-round cricketer in my time who has been as good as he has.

"Many of the great all-rounders - Sobers, Botham or, more recently, Flintoff - generally bat at five, six or seven.

"But Kallis has batted at three and four throughout his career in all forms of the game. He stands at second slip and bowls 85mph.

"The best cricketer I've seen is Shane Warne - he'd be number one pick in my all-time world XI - but Jacques Kallis would be a close second."

After an underwhelming start to his Test career - he averaged just eight after five matches - Kallis announced himself with a match-saving 101 against an Australia attack featuring Shane Warne and Glenn McGrath on a worn final-day Melbourne pitch in 1997.

Graeme Smith: It's been emotional few days knowing JK retiring. All I can say what a privilege to have played with the great man!

Shaun Pollock: Congrats @jacqueskallis75 '95 seems like just the other day! Thx for the memories & friendship!

AB De Villiers: 140 characters just won't be enough to do justice, so in short then, Jacques Henry Kallis, we salute you.

Alec Stewart: One of the greatest all rounders ever @jacqueskallis75 leaving the Test arena in style with his 45th Test 100. #alltimegreat

So impervious was he to the relentless sledging that Australia batsman Greg Blewett asked Kallis whether he was deaf.

In 1999, he showcased his all-round brilliance by scoring a century, a fifty and taking a five-wicket haul in a victory over the West Indies in Cape Town.

Although it took him until 2010 to score his first double-hundred - an unbeaten 201 against India in Centurion - he followed up with 224 against Sri Lanka seven matches later, his highest Test score and one of 14 occasions when he passed 150.

Former England bowler Angus Fraser says Kallis's professionalism and focus were evident during his season at Middlesex in 1997, when they were team-mates.

"Jacques was very disciplined and committed," Fraser recalls. "He had total devotion to being the athlete he needed to be.

"When we were messing around after training, he'd be down the gym to do an extra session.

"He was always a reluctant bowler because I think he was wary of getting injured, but, when he did bowl, he was seriously quick.

"It always amused me when people described him as a medium-pacer because this bloke could bowl as quick as anyone when the mood was right."

The mood was right at Headingley in 2003 when Kallis shouldered an extra bowling burden in the absence of Shaun Pollock, bowling his team to victory on the final day with a career-best 6-54.

While his bowling prospered in English conditions, Kallis occasionally struggled against the moving ball and his average in Tests in England was a relatively modest 35.33.

On home soil, however, he was frequently the player England found most difficult to remove.

In 2004-05, he tamed the England pace attack who would go on to win back the Ashes the following summer - Steve Harmison, Simon Jones, Matthew Hoggard and Andrew Flintoff - with back-to-back hundreds in Durban and Cape Town.

"Everyone has places where they don't do as well, but, in South Africa, we very rarely got him out in either format of the game," Vaughan adds.

"When Duncan Fletcher took over the England team, he talked a lot about Kallis and what a brilliant player he was. I used to watch him over and over on video replays with Duncan, thinking, 'I needed to copy those movements'.

"As a technician, he is right up there with the likes of Dravid and Mahela Jayawardene. He has that calmness under pressure - facing spin or quick bowling - whether his team were in a difficult position or a good position."

Difficult would be an understatement to describe South Africa's predicament in 2006, when Australia racked up 434 runs in a one-day international in Johannesburg.

But according to Pollock, it was Kallis who lightened the mood in the dressing-room and steeled South Africa for their famous record-breaking run chase by claiming that Australia had fallen "10 runs short" of a par score.

It is a revealing anecdote which goes against the popular impression of Kallis as a self-absorbed character who plays more for himself than the team, an image which Fraser also rejects.

"The mindset Kallis gets into underneath his helmet is what has made him successful," Fraser says.

"It is down to a batsman to find an emotional state that allows them to play at their best. Kallis found that place and stayed there - with great success - for the bulk of his career."