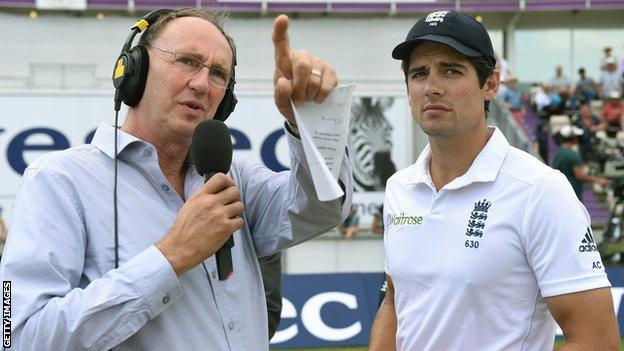 Almost everything went according to plan for England in the 266-run win over India in the third Test in Southampton.

It was a complete team performance to end a 10-match winless run and, with the series square at 1-1, sets up a terrific contest in the penultimate Test at Old Trafford next week.

Naturally, a lot of the focus will be on Alastair Cook, because he was under such tremendous pressure after the second Test defeat at Lord's.

To him, it must have seemed that just about everyone with a voice in the media was asking him to resign.

Personally, I never understood the argument that he should be replaced, because there was no obvious candidate to take the job on. I don't see how England would have been better off.

Now English cricket is in a better place because his position as captain has been restored and the pressure is off.

But who knows what we might have been saying had Ravindra Jadeja held that catch at third slip on the first morning when Cook had made only 15. However, he dropped it and Cook was able to complete a total turnaround. That is sport.

It was not only with the bat - he made scores of 90 and 75 not out - that Cook had an excellent game. As captain, everything he touched turned to gold. When he changed the bowling, England got a wicket. When he moved a fielder, that man took a catch.

Cook's success undoubtedly helped the rest of the team too - the weight being lifted from the captain made it easier for them to perform.

The other senior players - Ian Bell, James Anderson and Stuart Broad - all put in the strong displays that we are used to seeing from them, while six players in this England team who had not before won a Test match have tasted victory.

From top to bottom, it was a very good team performance, but they must keep it going. Winning one Test doesn't suddenly mean that everything is fantastic, but it does prove there is spirit and character in the England dressing room.

Between now and Old Trafford, focus will unfortunately shift to matters off the pitch and the two International Cricket Council hearings that hang over this series.

Anderson will be banned for a minimum of two Tests if he is found guilty of pushing and verbally abusing Jadeja during the first Test at Trent Bridge, while Jadeja is appealing against the 50% match-fee fine he received for his part in the incident.

Whatever the outcome, one of these sides is likely to be very angry by the time we begin again in Manchester next Thursday.

On this, I can't help but feel it would help if India reconsidered their stance on the Decision Review System.

Some may laugh at me saying this, because I was against DRS. Like the Indians, I have reservations about both the predictive element for lbw decisions and the challenging of an umpire's judgement.

But up to the point of impact - for example edges and bat-pad decisions - it works. If there was a way India would consider using a system for those decisions, it might avoid a nasty incident because we may be only one umpiring mistake away from tempers flaring.

If Anderson is banned for the Old Trafford Test, then England must wrap Broad in cotton wool to ensure he is fit to lead the attack.

They will likely recall Liam Plunkett to bowl fast, hopefully not with those leg-theory tactics that we've seen too often throughout this summer.

Part of what has worked in this win in Southampton has been the discipline. Bowling a full length, making the batsman play, taking catches and knuckling down with the bat.

That is what winning Test matches is about. It worked here and should be the plan for the rest of the series.