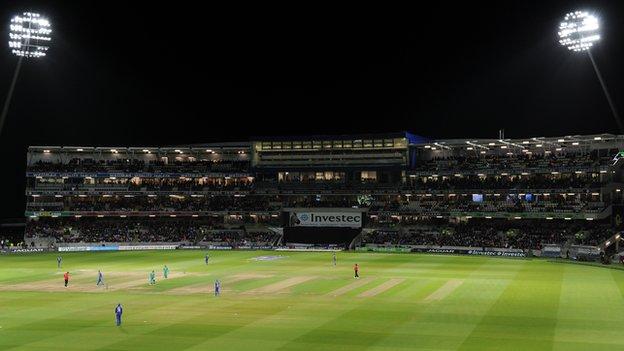 Birmingham Bears will host Surrey in the first T20 Blast semi-final at Edgbaston on 23 August before Hampshire play Lancashire in the second match.

Edgbaston will be hosting Twenty20 finals day for the sixth time in the 12-year history of the competition.

But it is the first time that the Bears have made finals day at their own home.

Before being rebranded the Birmingham Bears for this year's competition, Warwickshire's only previous finals day was in the inaugural year, 2003.

Coincidentally, their opponents Surrey were the winners that year, hammering the Bears in the final by nine wickets.

The Bears booked their place with Saturday's 19-run quarter-final win over Essex at Chelmsford, following the three straight victories with which they stole the final qualifying place in North Group from Yorkshire.

Surrey, last year's beaten finalists, secured their place with a narrow three-wicket quarter-final win over Worcestershire at The Oval.

The first semi-final will get underway at 11:00 BST, followed by the second semi at 14:30 between twice-winners Hampshire, looking for a third victory in five years, and Lancashire, who will be the other team at finals day yet to get their hands on the trophy.

A Jordan Clark-inspired Lancashire reached Edgbaston with a dramatic last-ball one-run win over Glamorgan at Old Trafford, while Hampshire beat Nottinghamshire by five wickets at Southampton on Sunday.