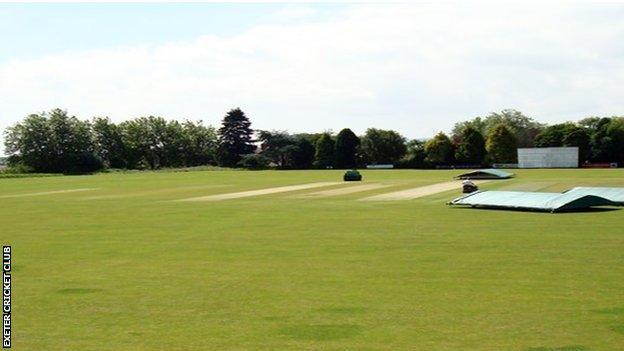 Devon missed the chance to go top of the Minor Counties Championship Western Division after collapsing to 96 all out in their second innings to lose by 58 runs to Shropshire at Exeter.

Chasing just 155 for victory, the home side slumped to 17-3 before losing their last four wickets for eight runs.

Devon drop to fifth in the table, while Shropshire move up to fourth.

Both teams are still in with a slim chance of winning the title going into the final round of matches, which start on 17 August.

Shropshire, who now face a home game against second-placed Wiltshire at Whitchurch, are 11 points behind leaders Cheshire.

Devon, whose final game is at home to Berkshire at Exmouth, are a point worse off.

Third-placed Herefordshire, who meet Wales, are on 81 points, three behind Wiltshire, who are a point behind Cheshire.

Devon got off to a good start against Shropshire, Charlie Miles taking 6-73 as the visitors were bowled out for 197.

But Randhawa then struck back, taking 7-53 as Devon were bowled out for just 175.

Youngster Jack Popham then took 5-24 to skittle Shropshire for only 132, leaving Devon with what looked a comfortable victory target of 155.

Ben Sanderson struck with the final ball of a rain-interrupted day two by trapping opener Ron Holman leg before to leave Devon 3-1 overnight.

After a rain-delayed start to the final day, play resumed after lunch, allowing Randhawa to spin his magic again.

It was a third straight victory for Shropshire since the reappointment of Ralph as skipper on the last day of June.