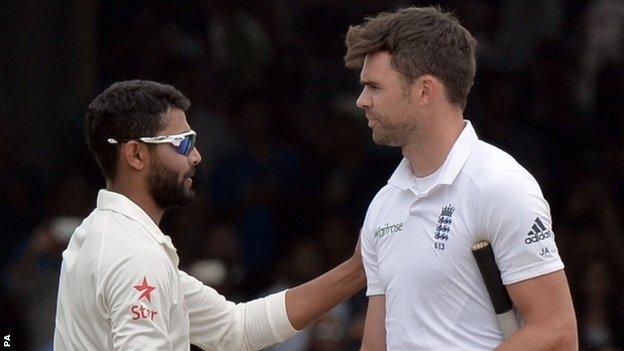 The International Cricket Council will not appeal against the decision to clear England's James Anderson over his fracas with India's Ravindra Jadeja.

An independent commissioner cleared Anderson of abusing and pushing Jadeja during the first Test at Trent Bridge.

ICC chief executive David Richardson reviewed the case following a written complaint from India, but has decided not to appeal against the verdict.

The fourth Test between the sides begins at Old Trafford on Thursday.

India are furious that Anderson, who has taken 16 wickets in the first three Tests, escaped punishment in Friday's hearing over what they see as a serious incident in the corridors of Trent Bridge.

Seamer Anderson, 32, could have been banned for four Tests had he been found guilty of a level three misconduct charge, while all-rounder Jadeja, 25, was cleared on a lesser charge for his part in the incident.

Richardson was given until Sunday, 10 August to lodge an appeal, but decided not to after "carefully considering" the written decision of commissioner Gordon Lewis, who is based in Australia.

"The ICC is satisfied with the manner in which the decisions have been reached," Richardson said.

"It was a complicated and sensitive matter relating to charges brought against two players at different levels of the ICC Code of Conduct.

"There appears to have been vastly conflicting evidence on both sides, with a total of 13 witnesses who gave testimony."

Despite the verdict, Anderson has been urged by former England batsman Geoffrey Boycott to cut out his habit of sledging opposition players.

"Jimmy should reflect on whether he wants to be remembered as one of the all-time great English seam bowlers or a foul-mouthed abusive bowler," Boycott wrote in the Daily Telegraph.

"International cricket is tough, competitive and uncompromising but we must reiterate that there is no place in the game for the use of offensive language that is personally insulting of one player by another," he said.

"It is imperative that all captains, players and coaches as well as umpires and referees are reminded of and do not shirk their responsibility to one another and to the game."