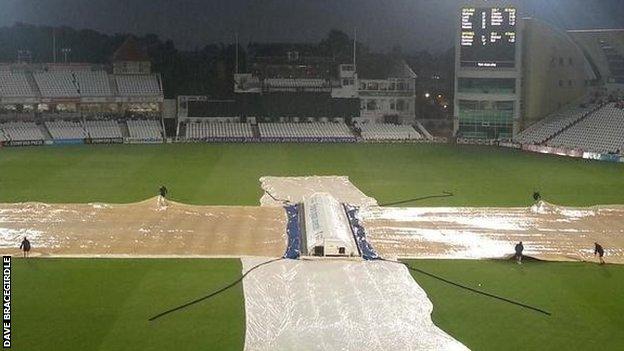 A torrential downpour ruined any chance of a result in a delicately poised One-Day Cup tie between Nottinghamshire and Kent at Trent Bridge.

Early afternoon rain meant the game was reduced to 38-overs a side, with Notts making 228-7 from their allocation.

Steven Mullaney top-scored with 62 off 60 balls and was ably supported by some big-hitting from Riki Wessells (29).

Kent were 48-2 after eight overs of their reply when the rain came, and play was abandoned at 20:30 BST.

Ben Harmison was unbeaten on 19 from 15 balls for the visitors, while the pick of their bowlers was Mitch Claydon who took 3-37 from his eight overs.

"It would have been interesting to see how it would have panned out, had we been able to get a full match in.

"I think the wicket of Sam Northeast put us in a very strong position, but the umpires had no choice but to come off when they did.

"Ultimately it's a fair result, so we'll take the point and move on."

"I think we matched them for most of the game, but it's never easy when you have to keep going on and off for the weather.

"I probably didn't help the team's cause by getting out at the end, but we're still unbeaten, so that doesn't do us any harm. We'll take the point and move on to Sunday.

"We probably just need one more win now to make sure we qualify."