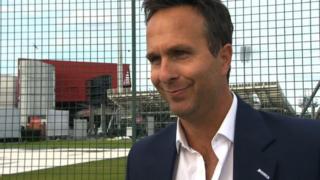 Former England captain Michael Vaughan says India forgot to "fight on the pitch" after capitulating to a Test defeat inside three days in the fourth Test at Old Trafford.

Vaughan labels India's performance "pathetic" and says there is finally some light at the end of the tunnel after England's struggles in 2014.

Moeen Ali is singled out for praise from Vaughan, calling the spinner a new "hero" for the fans as well as praising captain Alastair Cook.