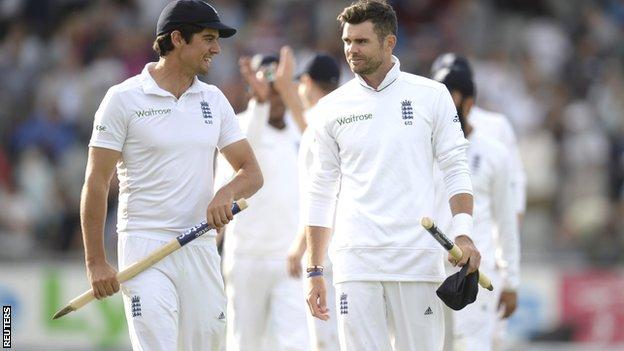 Captain Alastair Cook saluted his England bowlers after they dismissed India for 161 to win the fourth Test by an innings and 54 runs at Old Trafford.

England took nine wickets after tea on day three to take a 2-1 lead with one match left.

They lost Stuart Broad to a broken nose but Moeen Ali took 4-39 and Cook admitted: "We didn't think we'd get it done today - Moeen was fantastic.

"Everything went to plan. Broad and James Anderson are a brilliant pair."

Moeen, playing his sixth Test, was originally chosen as a batsman who bowls occasional off-spin, but became the fastest England spinner to reach 20 Test wickets - in only 58 days - and Cook said: "I've never seen a bloke work so hard and make such a big improvement."

Broad was hit while batting when he top-edged a bouncer from Varun Aaron and the ball squeezed between the peak of his helmet and grille.

The 28-year-old will receive treatment this week and the England medical team anticipate he will be available for the fifth Test at The Oval, which starts on Friday.

Cook added that Broad had sent him a text message saying England's performance made "great viewing from hospital bed".

Cook also revealed that Anderson, who took 2-18 in the second innings and now has 376 Test wickets, only seven short of Ian Botham's England record, had been suffering with a debilitating sickness bug.

"To see Jimmy bowl nine overs - he hadn't eaten for 48 hours - was great. He set the tone at the start. We didn't think they would fall as they did, but they did."

Victory was England's second in succession, having ended a run of 10 Tests without success by winning the third Test at Southampton.

Asked about the change in fortunes since defeat in the second Test at Lord's last month, when experts suggested he should step down as skipper, Cook said: "We hit rock bottom at Lord's. It was a tough moment for us as a side.

"You run out of chances in my position but I had a lot of confidence in the guys and that's why sport is so great.

"We have stuck together well in tough times this summer and having a younger side has made it easier to do that."