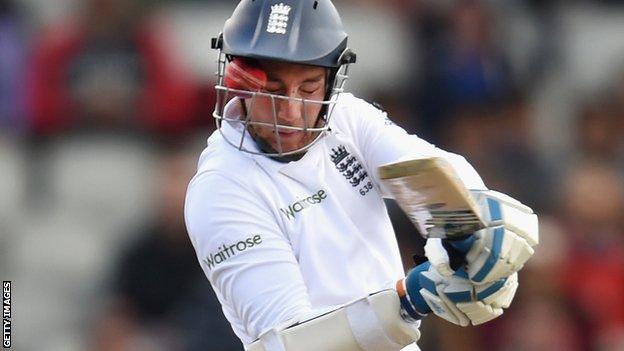 England pace bowler Stuart Broad may wear a protective mask to play in the final Test against India after suffering a broken nose.

Broad, 28, was struck by a Varun Aaron bouncer during England's fourth Test win at Old Trafford on Saturday.

He has been named in an unchanged 13-man squad for the fifth match at the The Oval, which begins on Friday.

Broad tweeted on Sunday: "Little bit sore this morning but not too bad! On to The Oval! (With a mask)."

The Nottinghamshire all-rounder will see specialists this week before a decision is made on his fitness.

Broad had hooked Aaron for successive sixes but, looking for a repeat, top-edged the ball between the grille and peak of his helmet.

He retired hurt on 12 and did not take the field in India's second innings, heading to hospital where X-rays confirmed a fracture.

In his absence, Chris Woakes shared the new ball with James Anderson as the tourists were bowled out for 161 to give England an innings-and-54-run-win and a 2-1 series lead.

Steven Finn and Ben Stokes retain their places in the fifth Test squad, while fellow seamer Liam Plunkett is again left out after an ankle injury.

Other sporting stars in masks