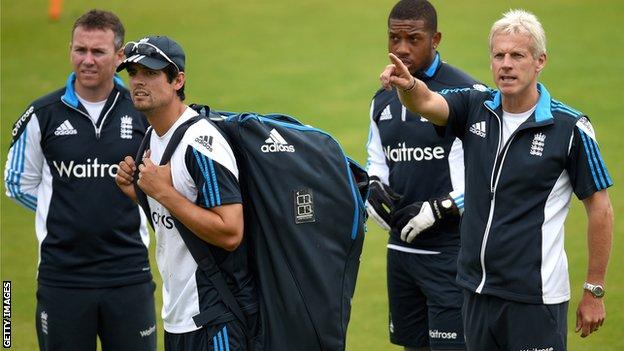 England coach Peter Moores insisted his team would not be complacent following a second successive victory over India.

Wins by 266 runs at Southampton and an innings and 54 runs at Old Trafford, put England 2-1 ahead with the final Test at The Oval starting on Friday.

"We certainly won't get carried away. We've got a huge game at The Oval to try and win a series," Moores told BBC Radio 5 live's Sportsweek.

"We will build on that win and hopefully finish the series strongly."

England have named an unchanged squad for the final Test, including paceman Stuart Broad, who suffered a broken nose while batting on Saturday.

The turnaround in results is a remarkable transformation for Moores and captain Alastair Cook, who were heavily criticised after England were beaten by Sri Lanka at Headingley in May and then lost by 95 runs in the second Test against India at Lord's.

This summer has seen the introduction to the side of batsmen Sam Robson, Gary Ballance and Moeen Ali, who have all scored centuries, with Moeen also becoming the fastest England spinner, in terms of days, to 20 Test wickets.

"We showed glimpses of playing well throughout the summer, we've had people performing really well which has gone a bit under the radar," said Moores.

"Some of the young players coming in, Gary Ballance has done very well and Joe Root - who has been around for a while - is really starting to grow as a player, but we weren't maintaining pressure for long enough to win a Test match and that was hurting us badly."

Victory at Southampton in the third Test ended a run of 10 matches without a win and the emphatic win in three days at Old Trafford makes England strong favourites to secure the series.

"Over the last two Tests those young players have kept performing, we've got to know each other a bit better and the senior players have started to play well," added Moores.

"As a unit, we have maintained pressure for long periods and that has made it harder for India to try and get a foothold in the game.

"It's nice to see some of those positions within a team start to take shape."