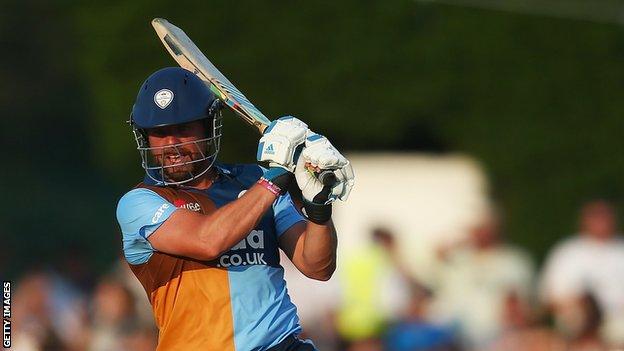 Wes Durston's second One-Day Cup ton of the season helped Derbyshire win a rain-affected match with Northants that went down to the final ball.

Richard Levi led the Northants response with a 62 and, needing a recalculated 227 to win, the hosts could have tied with a six on the last delivery.

But James Middlebrook fell to a Tony Palladino yorker in a dramatic finish.

The win moves Derbyshire up two places to fourth in Group A, while the hosts remain one place off the bottom and all-but out of the running for a quarter-final spot.

Having won the toss and chosen to bat, Derbyshire's innings was disrupted by rain after eight overs and, with the visitors on 35-0, the number of overs was reduced to 32.

That was the cue for opener Durston to start swinging, and the former Somerset man took 89 balls to reach his century, hitting nine fours and three sixes for his 108.

North found the boundary four times himself, but he was one of three victims of Andrew Hall before Derbyshire moved from 168-2 to 211-6.

It seemed as if Northants would struggle to trouble the target, as they failed to build meaningful partnerships, despite Levi's second half-century of the competition.

And even though Hall mustered 43 from 30, a recovery still seemed unlikely when he was bowled by Ben Cotton, leaving the home side needing 43 runs off 15 balls.

But 23 runs from the penultimate over led to a grandstand finish, which the visitors barely survived.