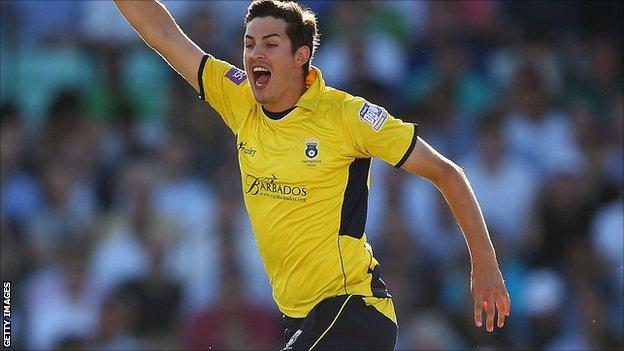 Hampshire all-rounder Chris Wood has signed a one-year contract extension at the club which takes him through until the end of the 2016 season.

The left-arm seamer, who has so far been restricted to one-day appearances this summer because of a knee operation last winter, made his debut in 2009.

The 24-year-old has since made more than 160 appearances for the club.

"I've played all my cricket here at Hampshire and hope to stay past those two years," Wood told BBC Radio Solent.

"I love playing here, love the lads and the success we've had and hopefully we can keep that going forward."

He was also in the Clydesdale Bank 40 winning side of 2012 and says having battled back from a knee injury, he hopes he can continue being part of Hampshire's successful limited-overs side.

"I doubted myself in the winter and wondered through my head how long I would play for," he said.

"But I've come back and played quite a lot and they've seen that and recognised that and thrown a two-year deal at me so that's very pleasing."