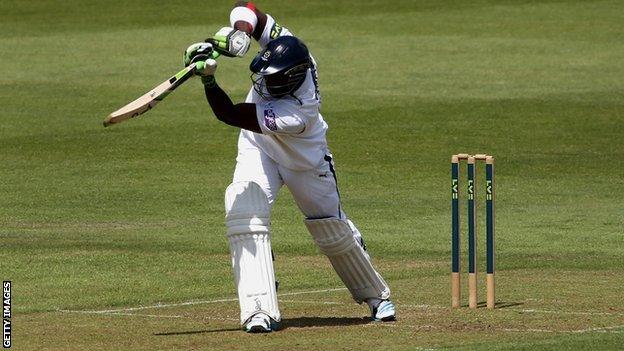 Michael Carberry (81), Jimmy Adams (97) and Will Smith (74 not out) set up a declaration by Hampshire at Canterbury.

The visitors made 311-5 despite Fabian Cowdrey's 3-59 before calling a halt to leave Kent a remote target of 501.

An opening partnership of 179 between Carberry and Adams allowed Smith to push on in his 61-ball knock.

When Kent batted, Rob Key fell lbw to Matt Coles, but Daniel Bell-Drummond (45 not out) and Ben Harmison (35) helped them to 95-2 at the close.

With Worcestershire well clear at the top of Division Two, Hampshire are locked in a battle for second with Surrey, who face a similar push for victory on day four against Leicestershire.

At the start of the third morning, Kent needed quick wickets as the visitors resumed 57-0 - 246 runs ahead.

They did not come, as Carberry and Adams took the game away, collecting 19 fours - plus two sixes for Carberry - between them, with the only blot against the Hampshire pair was their failure to make three figures, thanks to a double-strike from spinner Adam Riley.

Smith weighed in with a six and seven fours, assisted by James Vince (38), and when Key departed for five following the declaration, Hampshire tails were up.

But Bell-Drummond and Harmison put on a chanceless 71, until the latter drove spinner Danny Briggs to midwicket, prompting the home side to send out Riley as nightwatchman.

"There are few finer sights in County Championship cricket than the moment a young player takes his first wicket.

"Canterbury was treated to such a moment when the latest in the Cowdrey dynasty, young left arm spinner Fabian, had James Vince stumped as he advanced to boost the Hampshire total.

"He then told BBC Radio Kent, "it was a good feeling, I'm really happy and it's quite a good first scalp.""

"Hampshire will find Kent harder to bowl out second time around because the swing and bounce their pace bowlers enjoyed in the first innings has largely gone.

"The wicket of Ben Harmison near the end was a bonus, but if Hampshire are to win this they will need to be very patient on a lifeless wicket."