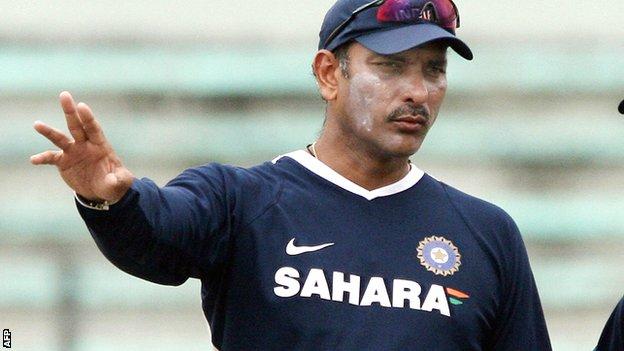 Former India captain Ravi Shastri will oversee the team for the five-match one-day international series with England, which starts on Monday.

The Indian Cricket Board said the 52-year-old would be in overall charge of cricket but that Duncan Fletcher would continue in his role as head coach.

Bowling coach Joe Dawes and fielding coach Trevor Penney have been "given a break" for the series.

The appointment of Shastri as team director for the series follows a disastrous run of three successive heavy defeats in the Test series, which England won 3-1.

After a drawn opening match, India won the second Test at Lord's by 95 runs but then lost at Southampton by 266 runs, at Old Trafford by an innings and 54 runs and at The Oval by an innings and 244 runs - the latter two matches in only three days.

The 2011 World Cup winners have won only one Test in 19 matches overseas and captain Mahendra Singh Dhoni admitted after The Oval defeat that he may have taken the team as far as he can.

Shastri, an obdurate opening or middle order batsman and slow left-arm bowler, who played 80 Test matches and 150 one-day internationals for India from 1981-1992, briefly coached the team on a tour of Bangladesh in 2007 but has been better known as a commentator since his retirement.

A BCCI statement explaining his appointment said: "In culmination of the discussions among all the office-bearers of the BCCI over the last couple of weeks, the BCCI has decided to avail the services of former India captain, Mr Ravi Shastri, to oversee and guide the Indian cricket team for the forthcoming one-day international matches against England.

"Mr Duncan Fletcher will continue as head coach while Ravi Shastri will be the overall in-charge of cricket affairs of the Indian Team."

The ODI series with England begins at Bristol and has matches at Cardiff, Trent Bridge, Edgbaston and Headingley, before India's tour concludes with a Twenty20 international at Edgbaston on 7 September.