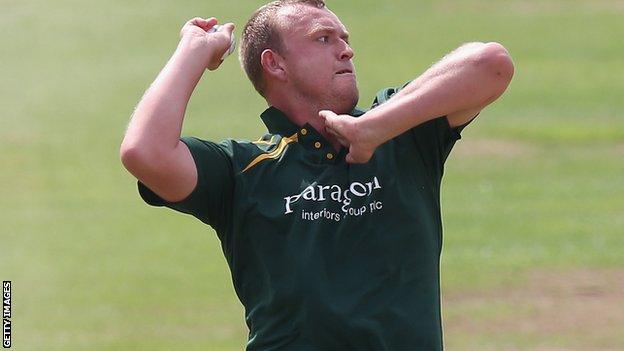 Luke Fletcher hit the final ball of the match for four as Nottinghamshire beat Warwickshire by one wicket to secure a One-Day Cup quarter-final home tie.

Fletcher, who took 4-44 with the ball, then helped lead Notts to the highest-ever one-day run chase at Trent Bridge.

Warwickshire, who also qualify for the last eight, made 302-7 with Jonathan Trott scoring 108 and Tim Ambrose 98.

The visitors, who would have secured a home game in the last eight with victory, had to settle for third place in Group B and an away tie, while Notts go through as group winners.

Nottinghamshire's run chase got off to a good start as Michael Lumb hit eight fours in making 36 from 21 balls before Hales, who was named in England's one-day squad to face India this week, took centre stage.

He hit 12 fours and three sixes in 90 balls at the crease, with his third maximum going into the second tier of the Radcliffe Road stand to bring up his third century in the tournament.

But the dismissal of Hales, who was bowled by Recordo Gordon, sparked a collapse and Samit Patel, Riki Wessels and Taylor all fell in the powerplay overs.

James Franklin (23) and Chris Read (15) scored crucial runs, before Ajmal Shahzad made a vital 27 from 16 balls.

Shahzad was given a game-changing reprieve after he was bowled by Gordon, as he was recalled after the delivery was referred to the TV umpire for a front-foot no-ball.

Four balls later, he smashed the same bowler for six off another no-ball delivery - this time for being over head height.

It left Notts needing four runs from the final over and, despite Shahzad being run out, Gurney and Fletcher saw Notts home.

Earlier, Gurney (2-72) had Varun Chopra caught by Read for seven and Fletcher accounted for Will Porterfield (12) to bring Trott and Ambrose together on 32-2 - and the pair went on to share a third-wicket stand of 176.

Trott was dropped on 36 by a diving Patel and he went on to hit 11 fours in his 121 balls at the crease.

A 21-ball 32, including four fours, from Laurie Evans ensured the visitors passed 300.

"It wasn't ideal leaving it all down to Luke Fletcher at the end there, but we did what we had to do to secure a home quarter-final.

"All credit to Jonathan Trott for the way he played but I thought Alex Hales was excellent again.

"Michael Lumb got us off to a fast start and I did a bit in the middle, but we then lost wickets in clumps which wasn't ideal.

"We have won a few close ones lately and are starting to believe we can win from anywhere. There's a strong belief in that dressing room."

"Obviously we are very disappointed to lose like that.

"But the pleasing thing is we are through to the quarter-finals. That's the main thing.

"It was obviously great entertainment and we're pleased to have played a part in that."