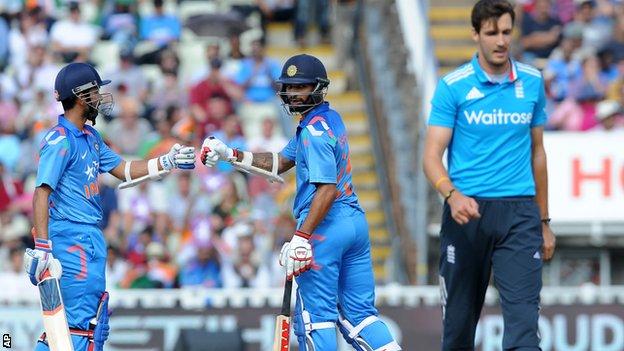 India sent England to a humiliating nine-wicket defeat to win the fourth one-day international at Edgbaston and clinch the five-match series 3-0.

England never recovered from slumping to 23-3 after being asked to bat.

Only Moeen Ali, who made 67 from 52 deliveries, showed any sort of fluency and England's 206 all out always looked way short of being competitive.

Three inept performances have sent Alastair Cook's side to defeat in their final home series before the World Cup, with seven matches in Sri Lanka and a tri-series against Australia and India to come before the tournament begins on 14 February.

Cook reacted angrily to former off-spinner Graeme Swann's suggestion that England cannot win the World Cup - claims that came before a ball was bowled in this series - but results have only supported Swann's theory.

This latest dismal display saw the majority of England's batsmen incapable of scoring runs when faced with accurate, but not devastating, bowling, while the home attack was then decimated by Rahane and Dhawan.

It was only the brilliance of Moeen that gave England any crumb of comfort, as the left-hander's confidence and aggression provided his team-mates with a lesson in limited-overs run-scoring.

In the side for James Tredwell as one of three changes - Gary Ballance and Harry Gurney also replaced Ian Bell and Ben Stokes - Moeen arrived at the crease with the score at 114-5 and dragged England towards respectability.

Whereas the rest of England's middle order were rendered shotless against India's trio of slow bowlers, Moeen was prepared to use his feet in hitting down the ground and square of the wicket for three sixes.

If Moeen impressed, then the England top order had earlier been static in immediately surrendering the initiative.

With Bhuvneshwar Kumar moving the ball in the air, a flat-footed Alex Hales was bowled by an inswinger and, in the same over, the under-pressure Cook cut to gully.

Soon after, Ballance presented a leading edge off Mohammed Shami to cover and, even as early as the eighth over of the match, England looked beaten.

All in all, the opening 10-over powerplay contained four maidens and, though Joe Root and Eoin Morgan attempted to rebuild, their 81-run stand took 21 overs to be compiled.

Both fell to spin - Morgan tamely guiding Ravindra Jadeja to leg slip and Root reverse-sweeping Suresh Raina to point - before England were hampered by Jos Buttler being harshly adjudged leg before to Shami.

Moeen dragged them past 200, but England were bowled out with three balls to spare and were then embarrassed by the way that Rahane and Dhawan set about the chase.

Taking only four singles from the first four overs, the opening pair then sprung into life, firstly with orthodox strokes, then some brutal hitting.

Strong through mid-wicket and down the ground, both cleared the ropes regularly. Rahane took James Anderson, Steven Finn and Moeen for maximums, with Dhawan doing the same to Gurney and Chris Woakes, whose four overs cost 40 runs.

By the end, it was barely a contest, as Rahane and Dhawan scored all around the wicket at will. Rahane completed his maiden ODI hundred from 96 balls, before surprisingly guiding a Gurney full toss to Cook at cover.

It was left to Virat Kohli to accompany Dhawan, who won the match with another six, as India showed Cook's men just how far away they are from succeeding them as World Cup winners.

Listen to the Test Match Special podcast on the future of England's one-day international side.