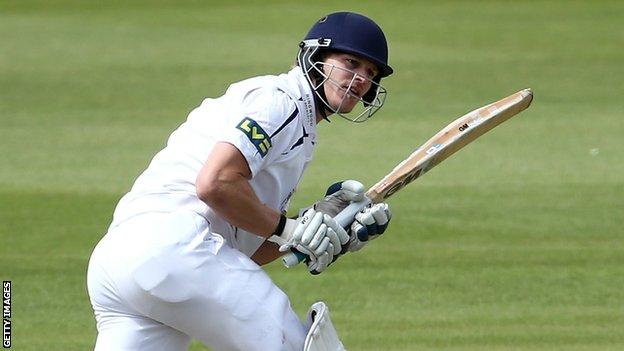 Hampshire captain Jimmy Adams says his side believe they can win Division Two of the County Championship.

They strengthened their position of second in the table with victory over Leicestershire and one more win will all but seal promotion.

Only seven points separate them and Worcestershire at the top of the table.

"It would be great to get promotion, but it would be foolish to settle for that if we've got the chance to go better." Adams told BBC Radio Solent.

Surrey, Essex and Kent also remain in the promotion picture - but Kent's hopes would be ended if they fail to beat Hampshire at the Ageas Bowl, that game starting on 15 September.

"If we can win one of these last two then we are going to be in a very strong position," said Adams.

"We play here against Kent and then go to Glamorgan. One win looks like it will be enough. We still have to play good cricket over those two games, certainly it's a nice thing for us that without Kyle (Abbott), the other boys have stepped up. That's been a massive boost."

Meanwhile, Andre Adams, who will join the county for three months in 2015 in both a playing and coaching capacity, says he is excited to have the chance to prolong his career.

The 39-year-old Nottinghamshire seamer had intended to retire at the end of the season, but will instead spend time with Hampshire before taking up a coaching role in Auckland in his native New Zealand.

"Coming into the season the idea was to retire at the end of it," he said. "I never thought of a short-term thing until middle of the season when this came to fruition.

"For me, I'm quite excited to work with people I don't know. Getting into coaching is something that really excited me. It's a good chance to test my man management skills."