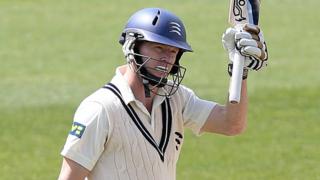 Middlesex captain Chris Rogers tells BBC London 94.9 he is proud he was able to help salvage a draw against Somerset and boost their survival hopes in Division One of the County Championship.

The 37-year-old Australia batsman scored an unbeaten 203 - his second double century of the season - after Middlesex were forced to follow-on at Taunton.

Middlesex are 19 points above Lancashire in the table and travel to Old Trafford in their final match of the season on Tuesday.