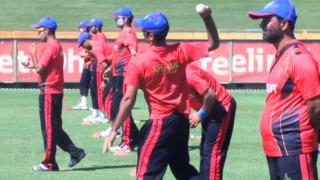 BBC Sport's Azi Farni looks at Afghanistan's national cricket team and how they are preparing for the World Cup next year in Australia and New Zealand.

The team has been around for just 13 years since it formed following the collapse of Taliban rule in the country, and in that time the sport has made rapid strides.