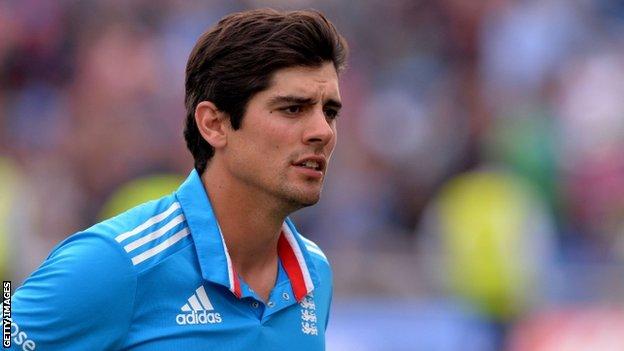 The selectors are taking a big risk by asking Alastair Cook to captain England in the Sri Lanka one-day tour and next year's World Cup.

National selector James Whitaker has given Cook his "100%" backing and praised his "fortitude" and "resilience" over a difficult summer, but those factors should have been irrelevant in their decision.

The key considerations are whether Cook is the right man to captain the side in the World Cup and, crucially, whether he can withstand England's crazy schedule and still be at the top of his game for the Ashes, which remains the key contest for most cricket fans.

My preference would have been for Cook to be rested from the World Cup. This level of sport is extremely hard work and being captain brings all sorts of other pressures.

After the disappointing one-day series against India, Cook will be under scrutiny from the very start of the Sri Lanka tour.

There will be questions asked every match and if England are badly beaten that pressure will only intensify in the run-up to the World Cup. It would make for a very difficult build-up for Cook and the team, with lots of questions being asked.

With Test series against West Indies and New Zealand following straight after the World Cup, there is a real danger of Cook being mentally and physically exhausted by the time the Ashes come round next July, and that would be a huge shame for English cricket and its supporters.

Cook, perhaps unsurprisingly, sees things differently. I spoke to him about 10 days ago and he absolutely assured me that he would be fine for the Ashes and beyond.

He said leading England in the World Cup was the chance of a lifetime and pointed out that you are a long time retired. He knows he faces a huge task but he sees it as a massive challenge.

He understands what we are saying but he doesn't want to just stay at home this winter. He wants to go and win the World Cup for England for the first time - and you have to admire him for that.

The decision has been taken now so all we can do as England supporters is wish him well and hope it all works out.

Beyond Cook, the biggest talking points in the 16-man touring party are the recalls for James Taylor and Ravi Bopara and the omission of Gary Ballance.

The Taylor call makes perfect sense. He brings a lot of runs with him and a lot of experience from county cricket. He can innovate and has a good solid technique. He is small and powerful which is a hard combination to bowl at because you have to change your lengths.

Bopara will have been surprised to have been left out in the one-day internationals against India. He has lots of international experience and gives them a useful bowling option on top of his batting.

I'm a bit disappointed Ballance is not in the squad. He was one of the big success stories of England's summer and really has something about him. He has a good tight defence but he can open up and go through the gears as he showed when he reached his first Test hundred with a six at Lord's.

As Whitaker was keen to stress, Ballance will still have a chance to force his way into the World Cup plans, and several members of the England Performance Programme will have similar aspirations.

Nonetheless, England will be hoping that the Sri Lanka tour allows them to fine-tune their World Cup plans and get some morale-boosting wins under their belt.

The Sri Lankans will have similar ideas and will be a fierce proposition on their own soil. For England to come home with a series win would be a significant achievement.