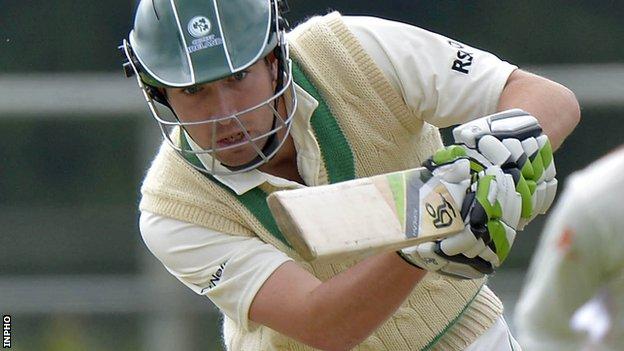 Andrew Balbirnie hit a maiden century for Ireland in Saturday's four-wicket win over New Zealand A in Dubai.

Kevin O'Brien took four wickets as the Irish bowled New Zealand out for 252 in 49.1 overs, with Anton Devicich top-scoring on 61.

Ireland reached 253-6 after 43.5 overs, with Balbirnie's superb 129 from 96 balls the highlight while Niall O'Brien scored a valuable 68.

The teams meet again in Dubai on Monday in a day-night contest.

Craig Young (2-52) and John Mooney (2-58) picked up two wickets apiece in a disciplined Irish bowling performance, which ensured their target was always within reach.

Middlesex batsman Balbirnie was at his positive best, continuing his impressive form shown on the recent acclimatisation tour of Australia and New Zealand.

He shared a second-wicket stand of 133 in just 103 balls with an almost equally impressive Niall O'Brien.

Balbirnie's dismissal sparked a mini-collapse in the Irish ranks, as they lost three wickets for just two runs.

However, vice-captain Kevin O'Brien (22 not out) showed all his experience in tandem with Alex Cusack to guide Ireland over the finishing line for a morale boosting win.