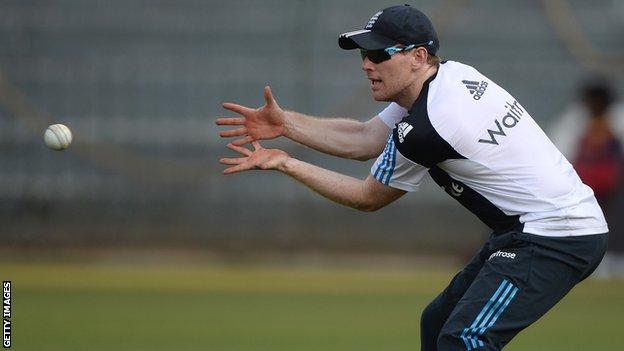 Eoin Morgan says he will take a "no frills" approach in his temporary stint as captain for England's fourth one-day international against Sri Lanka.

Morgan, 28, takes charge while regular captain Alastair Cook serves a one-match suspension for his side's slow over rate in the third ODI.

Dublin-born Morgan has skippered the ODI side on seven previous occasions.

Sri Lanka currently lead the seven-match series 2-1 after winning the first and second ODIs before England won the third match in Hambantota on Wednesday.

Cook has been under pressure to quit the one-day captaincy, with ex-England batsman Kevin Pietersen among those to call for him to quit.

Morgan diplomatically says it is "not an ambition" to take over from Cook as ODI skipper, but conceded he would accept the job if it was offered to him in the future.

"It's something you can't turn down," he said. "When I've done it in the past, I've really enjoyed it."

Morgan is currently in a poor personal run of form, having scored only 207 runs in his last 13 one-day innings since his prolific series in Australia last winter.

But he said: "I've had a reasonably good run of form when I've captained the side in the past. If it can help turn around my low run of scores, then I'll be even more pleased."

Cook's absence could allow Alex Hales to move up to his regular position of opener, with Ian Bell or James Taylor likely to come into the side.