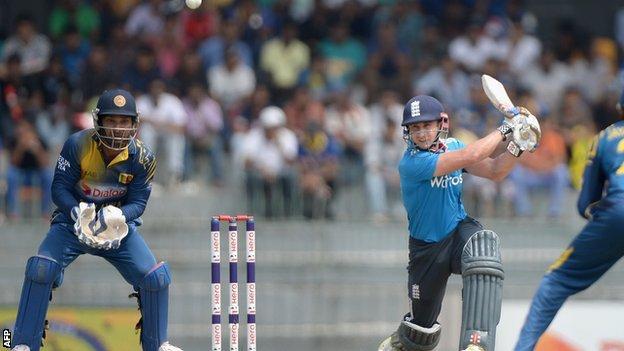 Many of the world's greatest batsmen have been under 6ft.

There are clear advantages in being short. Generally, shorter players are more mobile and flexible than taller men and can get into position quicker. Particularly small batsmen do pose unusual problems for bowlers.

England's James Taylor, at 5ft 6ins, emphasised that in the fourth one-day international against Sri Lanka in Colombo on Sunday, as he scored 90 in his side's narrow six-wicket defeat.

Taylor's performance was similar to how a man of similar diminutive size - Aravinda de Silva - used to play for Sri Lanka.

Like De Silva, Taylor pulls balls that are barely short of a length and Sri Lanka soon discovered that after his understandably scratchy beginning. He had just eight from his first 23 balls having come to the wicket in the second over.

Then, he suddenly sidled up the track and picked up a ball from Thisara Perera and hammered it way over midwicket for six. It was an astonishing stroke that surprised the Sri Lankans and got his innings going.

But it was his pulling which was most disconcerting for the bowlers. Several deliveries that would be a decent length to a batsman of average height seem fractionally short to the right-handed Taylor and are rifled to the boundary with a pirouette of the body and a thrust of the bottom hand.

The power Taylor, 24, generates from this rapid swivel and jab of the bat leaves the deep fielders standing.

The huge benefit of this shot is that it forces bowlers to readjust. They can't rely on their regulation length as a banker against Taylor. A simple, good length ball will not guarantee a dot in the book. Often bowlers over-compensate and, in attempting to bowl fuller, over-pitch. Half-volleys materialise.

This frequently happened when bowling to De Silva and, indeed, other short batsmen such as the West Indians Alvin Kallicharran and Gus Logie. They were excellent drivers as well as ferocious pullers and cutters. As a bowler you ended up with no length that you could be sure would contain them.

Taylor enjoys this advantage and makes good use of it. His innings was hugely impressive: lively, energetic, well thought-out, the field manipulated and the ball cleanly struck until he succumbed to cramp.

Most importantly it placed different demands on the bowlers who had to realign their timing - as disruptive to them as a bowler delivering from an unusual angle or an exceptional height is to a batsman.

Diversity in a team is invaluable, as England's bowlers trying to contain the sublime artistry of the right-handed Mahela Jayawardene and the ruthless accumulation of Kumar Sangakkara keep discovering. They put on 96, their 45th partnership of more than 50 in one-day internationals. And both men are under 6ft.