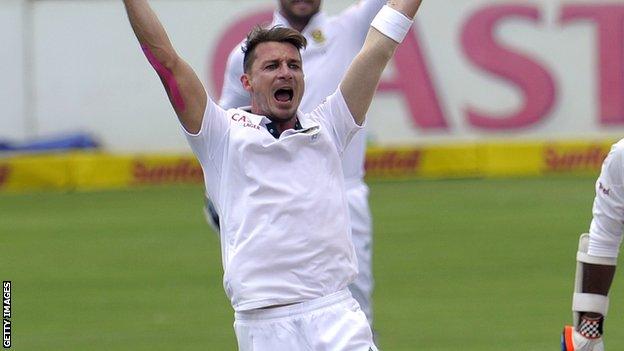 Steyn claimed six wickets in five overs at Centurion to dismiss West Indies for 131 after resuming the day on 76-2.

They lost their last seven wickets for 44 runs with Steyn claiming 6-34 to wrap up the match a day early.

South African captain Hashim Amla said: "We didn't expect it to finish so early, but Dale bowled exceptionally and the wicket got difficult."

Fast bowler Steyn had failed to take a wicket in the first innings and limped off the field on the third afternoon with a groin problem.

But he showed no signs of discomfort to help enforce South Africa's second biggest ever innings win, beaten only by the innings and 229 runs victory over Sri Lanka at Newlands in 2001.

There are two more Tests in the series, at Port Elizabeth on Boxing Day and in Cape Town, starting on 2 January.