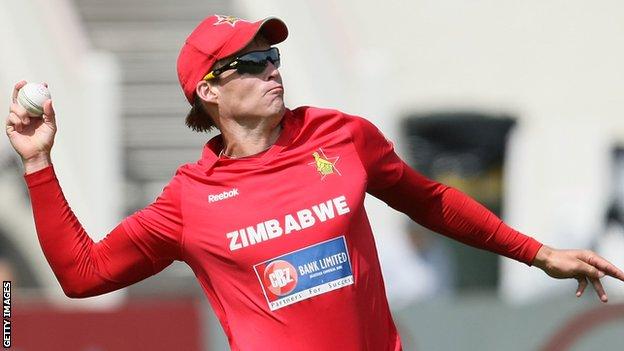 Zimbabwe all-rounder Malcolm Waller has been suspended from bowling by the International Cricket Council, only seven weeks before the World Cup.

The off-spinner, 30, was reported after the second Test against Bangladesh in Khulna last month.

The ICC said analysis "revealed that all of his off-spin deliveries exceeded the 15 degrees level of tolerance permitted under the regulations".

He will have the opportunity for re-assessment after modifying his action.

The middle-order batsman, who has been named in Zimbabwe's provisional 30-man World Cup squad, has frequently been used as a bowling option in the last 12 months and in his last one-day international against South Africa in September, bowled his full complement of 10 overs.

Nine off-spinners, including Waller's Zimbabwe team-mate Prosper Utseya, have been reported to the ICC for illegal actions in the last 13 months.

Zimbabwe do not have any full internationals scheduled before the World Cup in Australia and New Zealand, which starts on 14 February.