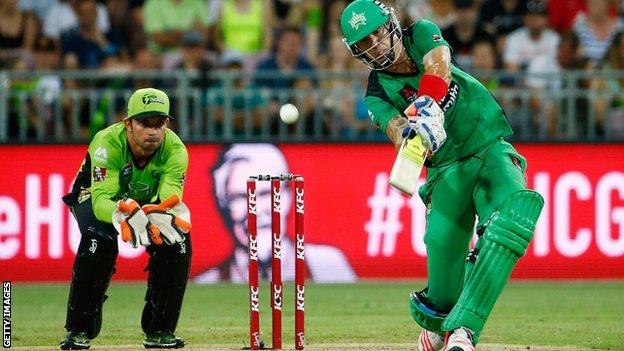 Kevin Pietersen is the leading run-scorer in Australia's Twenty20 Big Bash competition after hitting an unbeaten 67 off 42 balls for Melbourne Stars.

The 34-year-old, who was sacked by England last February, helped Melbourne beat Sydney Thunder by eight wickets and has scored 262 runs in six innings.

Pietersen said England had "an outside chance" of winning the ICC Cricket World Cup, which starts next month.

"I'm just enjoying myself, having fun. I think the batting line-up they've [England] got is exciting," he told Sky Sports.

Pietersen's runs have come at an average of 52.4, with a strike rate of 124.17 per 100 balls, putting him ahead of Brisbane Heat's Chris Lynn in the run-scoring list.

Melbourne Stars are third in the table as they seek a semi-final place, with Sydney Thunder now out of contention after their defeat.

England's selectors regard the issue of picking Pietersen as redundant, although the player has said he would welcome the chance to return.

This week, he displayed his new tattoo - a map of the world on his chest and back, with red stars indicating everywhere that the batsman has scored an international century.