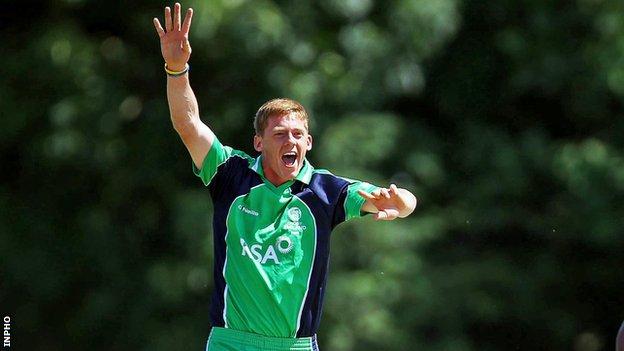 Craig Young epitomises the bullish spirit running through the Ireland squad ahead of the World Cup in Australia and New Zealand.

The Bready paceman is among six players in the Irish ranks set to make their first appearance at the tournament.

It's a daunting prospect for most newcomers, especially club bowlers fearing a bashing from the big hitters of world cricket.

Ireland will go in as massive underdogs in their Pool B games against defending champions India, South Africa, Pakistan and the West Indies.

But they will draw on past World Cup heroics - taking the scalps of Pakistan in 2007 and England four years later.

Progressing from the pool stage is a minimum target while wicket-keeper Gary Wilson believes a semi-finals spot is needed to "change the face of Irish cricket".

Young also has high expectations and the 24-year-old is relishing the prospect to of going head-to-head with the world's top batsmen.

"AB de Villiers hit a record 31-ball hundred recently for South Africa - it would be amazing to run in and bowl against him," said Young.

"There's Chris Gayle at the top of the West Indies order, one of the chockfull of amazing players we will face.

"These are the players who a lot of us grew up watching on TV so it's just great to pit our wits against them.

"It's been a boyhood dream of mine to play in the World Cup and I want to be involved from the first to the very last game - hopefully that's the final."

Ireland also take on Bangladesh and United Arab Emirates, with the likely scenario of these being must-win games in order to maintain hopes of securing the top-four spot required to make the quarter-finals.

Kevin O'Brien's magnificent knock against England, the fastest century in World Cup history, was the highlight of the 2011 tournament but the Irish failed to progress from the group stage.

Another early exit would be a major blow as Ireland aim to show the cricketing world that they merit a move up from Associate to Test level.

Much will depend on William Porterfield, Paul Stirling and Ed Joyce at the top of the batting order with coach Phil Simmons hoping the explosive Kevin O'Brien can produce another giant-killing performance.

Somerset spinner George Dockrell provides both wickets and control while Young has quickly emerged as a promising replacement for Boyd Rankin.

Sussex signed the seamer in 2010 after he impressed for Ireland in the U19 World Cup, but injuries contributed to a frustrating spell in the county game.

Young worked with former Australian bowler Craig McDermott last winter and signed a contract with Ireland before making the squad for the 2014 World Twenty20 in Bangladesh.

He starred on his one-day international debut in September, claiming five wickets in a Dublin victory over Scotland.

Now is he looking forward to spearheading the Irish attack for the World Cup opener against the West Indies in Nelson next Monday.

Young bristles with confidence, and a high degree of optimism, as he prepares for the biggest test of his career.

"We always have high expectations, as do our fans - we aim to win as many matches as possible and we have a few targeted where we can give it a good go.

"Look at the guys in our team, the likes of Ed Joyce and Kevin O'Brien. Everyone in our side can win us a game.

"If we play to our best there is no reason we can't produce a few more World Cup upsets."