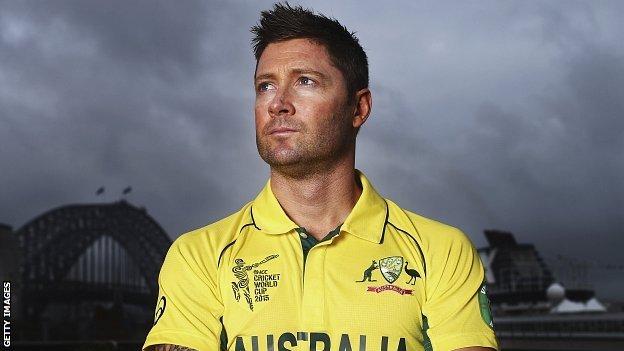 Australia captain Michael Clarke will play in a club match this weekend as he continues his rehabilitation from injury ahead of the World Cup.

Clarke has not played since tearing his right hamstring last month in the first Test against India.

He was selected in Australia's 15-man squad, with the proviso he will be fit for his country's second group match against Bangladesh on 21 February.

Clarke, 33, will play as a batsman only for Western Suburbs against Gordon.

Should he come through the grade match unscathed he will play in a Cricket Australia XI fixture against Bangladesh on 5 February.

"I regard this as a positive step on my road to a return to full fitness," said Clarke, who has played 238 one-day internationals and scored 7,762 runs at an average of 44.86.

"At the same time I know I have to respect the fact I am on a daily programme and there is no point in us getting too far ahead of ourselves."