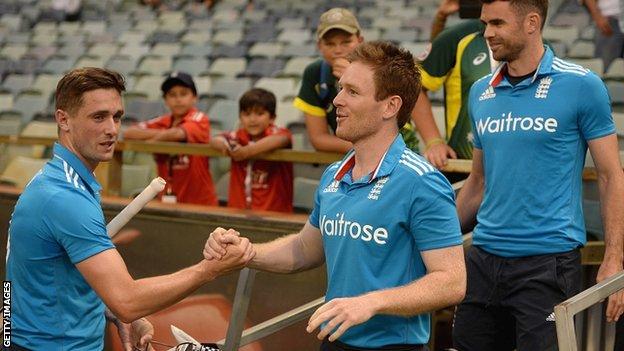 Captain Eoin Morgan says England are growing in confidence before the World Cup, having reached the final of the tri-series tournament in Australia.

England beat India by three wickets in Perth on Friday to set up a decider against Australia on Sunday.

"We had a bad run before this tour but now we're winning games. Winning on Sunday would be huge," said Morgan.

"We made things very hard for ourselves, which we tend to do. But the guys were ruthless in the end."

Having lost twice to the hosts and beaten India, England needed to win at the Waca to reach the final.

England dismissed the defending world champions for 200, with Steven Finn taking 3-36 from 10 overs and James Anderson a miserly 1-24 from nine.

Victory was England's seventh in their past 20 one-day internationals.

"The bowing as a whole was really good," Morgan told Test Match Special. "We took advantage of the extra bit of bounce and the uneven conditions, bowling a lot of cross-seam balls. In the past we haven't adapted that well, so that's a big positive.

"The stumble at the start of our batting was a problem but the fact the guys [Taylor and Buttler] were ruthless in chasing down the target was huge.

"In the past we've stumbled over the line but James and Jos were exceptional."

Morgan denied Ravi Bopara was under pressure, despite the Essex all-rounder not bowling against India and throwing his wicket away having scored only four.

"Ravi's one of our senior players and a guy who we've identified as a match-winner," said Morgan. "He'll be a big part of our success over the next couple of months."