James Anderson has ridiculed comments made by Geoffrey Boycott about the batting of England's World Cup captain Eoin Morgan.

Former England batsman Boycott said Morgan was not "as good as he thinks he is" and "not so clever" against top-class bowling.

But pace bowler Anderson responded: "That's rich coming from him.

"Morgan is a world-class player and has been for over 100 games. We know how destructive he is when he's in form."

Boycott, who scored 1,082 runs in 34 one-day innings for England, at an average of 36.06, was passing judgement on a poor sequence of form that has seen Morgan dismissed for less than 20 in nine of his last 11 one-day international innings.

Anderson, though, defended his captain, saying: "He has been great for us. We're hopeful he can get some form. We've seen him get a hundred on this trip against Australia."

The 32-year-old was speaking before England's opening World Cup game against co-hosts Australia at the Melbourne Cricket Ground on Saturday (03:30 GMT).

Former England captain Michael Vaughan said Morgan had never claimed to be "the greatest", but disagreed with Boycott's comments.

"I think he can have his opinion," said Vaughan. "I work with him, respect him a lot, I like him, but I disagree with what he's said about Eoin Morgan.

"He needs runs, but in the past Morgan has had the kind of mentality to produce on the big stage."

More than 90,000 spectators are expected to be in attendance as England look to improve on a run that has seen them lose 13 of their last 15 ODIs against Australia down under.

"It's obviously a big game for both sides," said Anderson, who has taken 264 wickets in 188 matches since making his debut at the MCG in 2002.

"As a cricketer, you want to play in big games like this. We're guessing that the majority of the crowd will be against us, so it's something we're prepared for. It's something that we have to try to soak up and enjoy.

"We feel confident that we can beat anyone on our day. Confidence is building in our team and we're hoping that we can put things together when it really matters."

Captain one day, dropped the next?

With Australia captain Michael Clarke ruled out of Saturday's opener because of injury, George Bailey has been confirmed as his replacement.

However, Bailey admitted that he was likely to lose his place in the team when Clarke returns for the second match against Bangladesh.

The 32-year-year-old batsman also said that Australia should enjoy the extra support they receive as co-hosts, rather than feel the pressure of being favourites to win the tournament.

"I don't think I'll keep my place, but that's fine," said Bailey. "I think it's great that Michael is on track to come back, he's done a remarkable job to be available for the Bangladesh game.

"I'm not feeling the pressure of expectation. We get to enjoy some home comforts and home support. We should embrace the opportunity of a home World Cup.

"There have been some amazing Australian players who have never had the chance of a home World Cup. You can view that as pressure, or view it as a wonderful opportunity."

With so much of the conversation in Australia surrounding the fitness of Clarke, former leg-spinner Shane Warne had his say on the process the captain has had to get through since injuring his right hamstring on 13 December.

"They've tried to break him with all the fitness stuff, but he's ready to go, fitter than he's ever been in five years. I would have picked him."

Warne, a World Cup winner in 1999, also said England were capable of shocking Australia on Saturday and identified Ravi Bopara - whose place may be under threat - as one of the key men.

"England need James Anderson, Stuart Broad, Ian Bell, Eoin Morgan and Ravi Bopara to fire. If a few of those guys have a day out at the World Cup, they could go all the way."

And some missing balls

In an attempt to ramp up the tension and create a partisan atmosphere before the Australia-England match, a betting company has placed posters around Melbourne that read "Missing: pair of balls. If found please return to the England cricket team".

On Friday, they took it one stage further, draping banners from two helicopters that circled the city, flying over the MCG just as England were training.

If England were unimpressed, so too was Bailey, who sarcastically said the banners were "very witty". 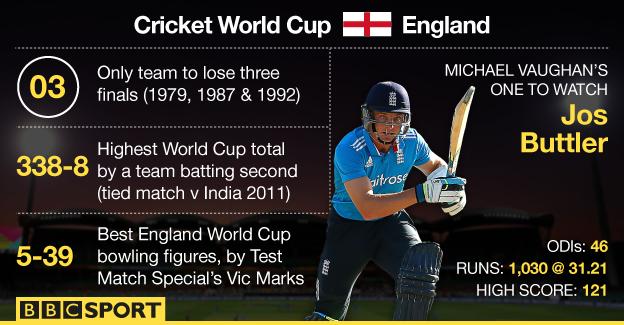 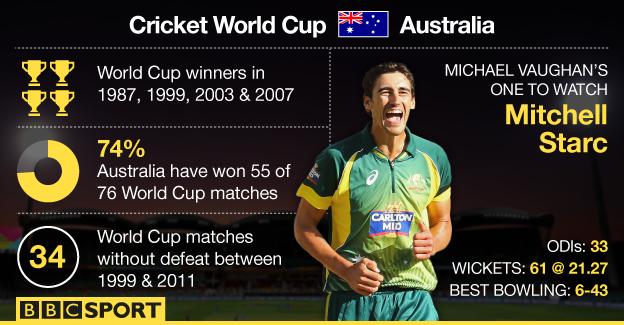