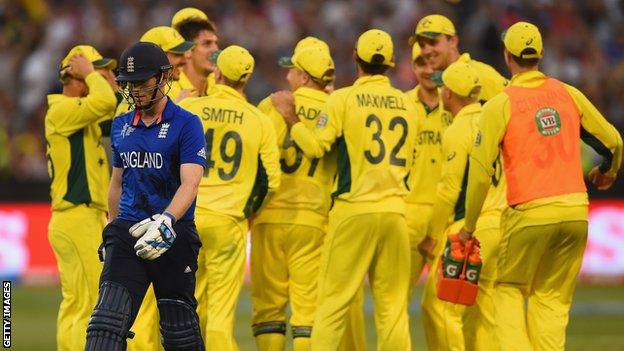 Even though an opening day defeat to a very strong Australia side does little to England's long-term World Cup prospects, it will have been a chastening experience for Eoin Morgan's men.

England were not only beaten by 111 runs in Melbourne, they were given a lesson in how to play 50-over cricket by a team that are on a different level to them.

From 70-3, Australia recovered - as you have time to do in this form of the game - to 342-9, but they were helped by England's poor fielding and death bowling.

Fielding is a barometer of the way a team is performing and England were poor. They dropped catches and missed run-out opportunities - not least when Chris Woakes put down Aaron Finch on nought. Finch went on to make 135.

No one means to drop catches. Everyone has done it. But when you win the toss, stick a team in and get a chance like that - one that Woakes would take four times out of five - shoulders drop.

Australia, on the other hand, were buzzing. They were taking brilliant catches, making diving stops and had an all-round greater level of intensity.

England's bowling wasn't actually too bad until it all went wrong at the end. Their plans just seemed to be wrong.

They stuck with the notion of bowling slower-ball bouncers, which is rather old-hat now. Batsmen are ready for them and they know how to play them.

In contrast, England rarely employed the yorker, which was bizarre in the sense that, when they did, they bowled it well. The yorker has been used as a death tactic since the birth of the limited-overs game and I don't buy the theory that batsman now play it too well.

When faced with such a huge chase, England's batsmen had to take risks, but the top-order collapse was still very disappointing.

Moeen Ali played a poor shot and Gary Ballance looked to be feeling his way in, akin to a player who was playing his first competitive match on tour.

Still, the one bright spot of the day for England was provided by James Taylor, who was cruelly robbed of a maiden hundred by a run-out decision that was made in error.

Yet, the fact he was batting at number six after seemingly making the number three spot his own was yet another indictment of England's muddled thinking.

In the opening game of the World Cup, they were still tinkering - Ballance in for Ravi Bopara, Taylor down to six, Stuart Broad taking the new ball instead of Woakes.

So, the best way to employ Taylor is one more thing for England to ponder before they take on another tough challenge against New Zealand on Friday.

If Ballance plays, he probably has to bat at three, so where does that leave Taylor? Can England come up with the right plans in the final over of the opposition innings and carry them out successfully?

And, the most easy thing to fix, the fielding - can it be improved?

We are only one day into this World Cup and defeat is far from terminal, but England already have much to think about.