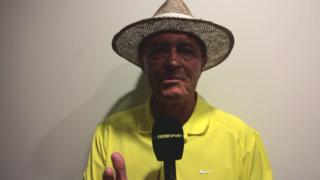 Geoffrey Boycott says India's Suresh Raina is "one of the best middle-order batsman in the world" after he helped India record a 76-run victory over Pakistan at the 2015 Cricket World Cup.

A chase of 301 looked within Pakistan's grasp at the interval, but they never threatened to keep up with the six-an-over run-rate.