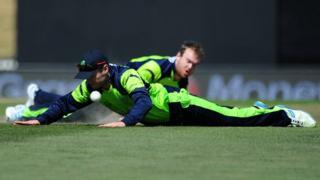 Ireland win one of the best - Porterfield

Ireland captain William Porterfield says his side's four-wicket win over the West Indies at the World Cup is "right up there" with their best victories in the 50-over one-day game.

"We have so few games against top calibre opposition so it's nice to show what we can do when we do get the opportunity to play a top eight nation," said the Irish opening batsman.

"I don't like Ireland being labelled as an Associate nation and it would be nice to have more fixtures at this level of competition," reflected Porterfield.

Arteta 'not worried' about his future