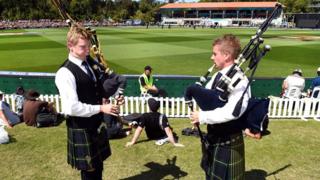 BBC Sport takes a look at some of the key stats from co-hosts New Zealand's win over Scotland on day four of the 2015 Cricket World Cup.

Scotland made favourites New Zealand work surprisingly hard for their three-wicket win at the University Oval in Dunedin.

Four Scotland batsmen fell first ball, a World Cup first, and only the third such instance in a one-day international.