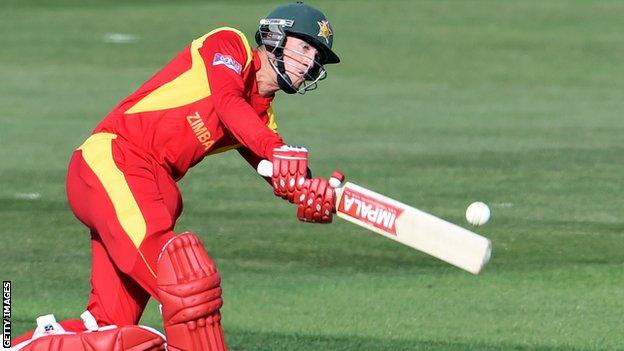 UAE's Shaiman Anwar scored 67 as the qualifiers posted 285-7, their highest one-day international score, in their first World Cup match since 1996.

Zimbabwe started slowly before the greater quality and experience of the Test nation began to shine through.

Sean Williams's well-constructed 76 led them to a four-wicket victory with 12 balls to spare in Pool B.

UAE, the last of the 14 competing nations to play their opening match of the tournament, almost caused a shock in the picturesque New Zealand city of Nelson as they chased a first ODI win against a Test side.

Zimbabwe were boosted by an encouraging display against South Africa in their opening match, producing devastating spells with bat and ball before eventually succumbing to a 62-run defeat.

The lowest-ranked Test side showed enough in that performance to suggest they would reach the target against a UAE side which had only recorded one previous World Cup win.

Brendan Taylor's swashbuckling 47 steadied Zimbabwe's chase before the sixth-wicket partnership of Craig Ervine and Williams upped the run-rate in an even game.

Ervine's dismissal gave UAE hope before man-of-the-match Williams took control, capping a tremendous innings with three successive boundaries as Zimbabwe, whose previous best run chase had been 231 against Kenya in 1999, boosted their hopes of reaching the last eight.