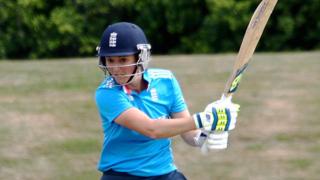 Charlotte Edwards says she is "proud" of her achievement as she prepares to captain England for the 200th time.

Edwards will become the first player in either the men's or women's game to lead England in 200 games when they face New Zealand in a T20 match on Tuesday.

The England captain also talks about the introduction of a women's Big Bash in Australia and says there will be a T20 league for women in the United Kingdom soon.