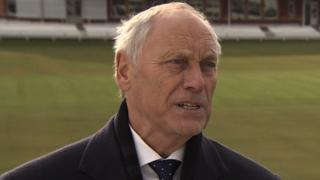 Incoming ECB chairman Colin Graves says he wants to see England's cricketers "playing with a smile on their face" rather than looking "a bit frightened" as he claims they do now.

The 67-year-old Yorkshire chairman, who is currently ECB deputy chairman, will officially take up the five-year post at the ECB annual general meeting in May, succeeding Giles Clarke in the role.

Graves also tells the BBC's Tanya Arnold that English cricket is "at a crossroads" with lower attendances in all forms of the game, and that he wants to "decongest" the season while introducing an "English Premier League" to the fixture list.