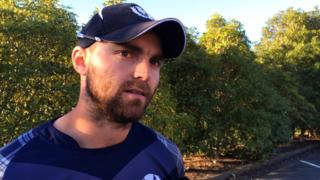 Chasing 211 in Dunedin, Afghanistan were reduced to 97-7 but Samiullah Shenwari's 96 gave them hope before last man Shapoor Zadran hit the third ball of the final over for four to seal victory.

Mommsen says the match was "a huge opportunity" for Scotland to score their first ever win in a World Cup, but they have now lost all 11 matches they have played in three World Cups, surpassing the Netherlands' previous record of 10 successive defeats from debut.