South Africa condemned Ireland to their first defeat of the World Cup as they cruised to a 201-run win in Canberra.

Ireland collapsed to 48-5 as they were bowled out for 210 in 45 overs despite Andrew Balbirnie's 58.

South Africa need to win only one of their remaining two group games, against Pakistan and the United Arab Emirates, to reach the quarter-finals. 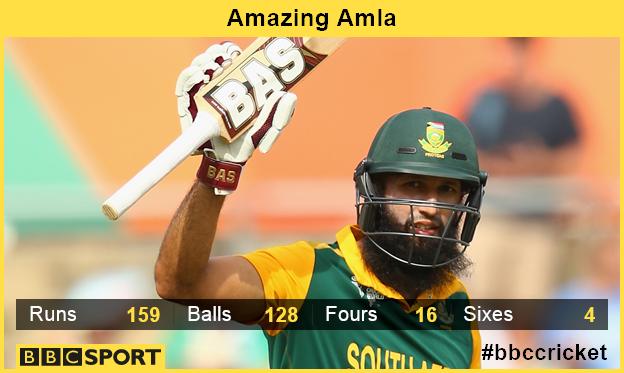 Ireland remain well placed to qualify, although the margin of defeat at the Manuka Oval had a negative impact on their net run rate before Saturday's clash with Zimbabwe in Hobart.

This game served as another illustration of South Africa's immense power with the bat, albeit on a placid surface and against an attack lacking penetration.

Perhaps more alarming for their rivals, captain AB de Villiers - the star of their 257-run win over West Indies with 162 not out off 66 balls - played a negligible role with 24 off nine deliveries.

Amla and Du Plessis shared 247, a South Africa record for the second wicket, before Rossouw and David Miller plundered an unbroken 110 off the last 8.3 overs.

"We did it our way," said De Villiers. "We have made a lot of hundreds over the past 12-15 months and we are very proud of that.

"Amla is still the rock and will always be that for us."

Ireland were left to rue two costly misses, Amla put down on 10 by Ed Joyce, and Du Plessis edging between wicketkeeper Gary Wilson and Kevin O'Brien at slip when on 19.

Thereafter, they were barely troubled, rotating the strike almost at will while rarely wasting the chance to punish Ireland's increasingly wayward attack.

"It was a difficult evening," said Ireland captain William Porterfield. "We had one early breakthrough and wanted more but then it was hard for us.

"You want to be taking your chances, but they played very well after that."

Having seen Quinton de Kock fall in the third over, Amla - typically strong through point and mid-wicket - batted with his usual fluency as he became the quickest player to reach 20 ODI centuries.

Du Plessis, whose hundred was equally measured, was finally bowled making room to Kevin O'Brien, and the departure of Amla and De Villiers in the space of three balls merely gave Rossouw and Miller the freedom to mount a late-innings assault.

Rossouw finished with 61 off 30 deliveries and Miller 46 off 23, taking his average in the competition to 113.

An improbable Ireland chase became nigh on impossible as Abbott and Dale Steyn shared five wickets in the first 11 overs.

Balbirnie and O'Brien's sixth-wicket stand of 81 helped Ireland avert the heaviest defeat in World Cup history, but the remainder of the innings was no more than an exercise in limiting the damage to their net run rate.