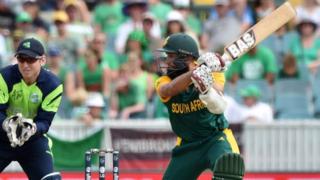 Graeme Swann says South Africa batsman Hashim Amla "batted like a genius" after scoring 159 in the Proteas' 201-run win over Ireland at the 2015 Cricket World Cup.

South Africa became the first side to score more than 400 runs in consecutive one-day internationals when they posted 411-4 - the second highest World Cup total - before bowling out Ireland for only 210 in reply.

Former England spinner Swann says "400 is the new 300" given such huge totals are being amassed so regularly at the tournament.