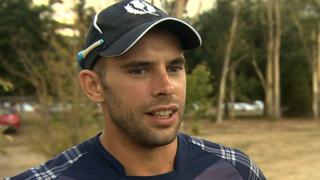 Scotland batsman Kyle Coetzer says it was "nice to show the world what we're capable of" following their six-wicket defeat by Bangladesh in Nelson, New Zealand.

Scotland's fourth Pool A loss means they can no longer qualify for the knockout stages and England must beat Bangladesh on Monday if they are to keep alive their hopes of reaching the quarter-finals.