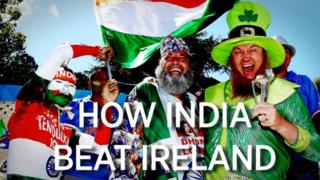 BBC Sport looks at how India qualified for the quarter-finals of the 2015 Cricket World Cup following an eight-wicket win over Ireland.

It was the fourth time India had bowled out a team in this high-scoring World Cup, but Ireland's consolation is that they made the highest total against MS Dhoni's side.

Ireland came into the match knowing that a point would see them qualify, but now need to beat Pakistan, or gain a point should the fixture be rained off, in their final group match in order to progress.