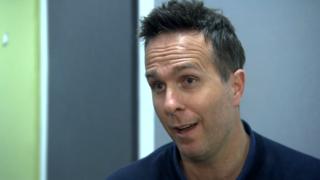 England are a punch bag - Vaughan

Former captain Michael Vaughan says England are "a punch bag" and must accept they have made "a lot of mistakes" at the Cricket World Cup in order to be competitive again.

England beat Afghanistan by nine wickets in their final group match on Friday, but had already been eliminated after a disappointing defeat to Bangladesh. Vaughan says, with incoming ECB Chairman Colin Graves taking over, "this is the time that the game has to accept change".

Vaughan believes that while England have enjoyed great moments in the past, they "have never been the team of an era" like the Australians have, and need to make radical changes to the structure of the English game, such a reducing the number of matches played, in order to compete at the next tournament in 2019.