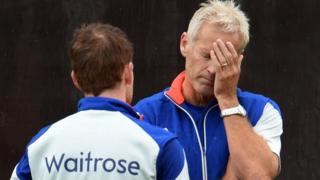 The former England batsman considers a range of topics put forward by BBC Sport Twitter followers, from which England representative he would rather sit next to on the plane home to which current players would survive the chop if he were selecting the side.

Peter Moores' side defeated Afghanistan in their final fixture but exit the tournament having lost four of their six Pool A matches.