India continued their perfect record at the World Cup with a six-wicket win against Zimbabwe in Auckland.

Holders India had already qualified for the quarter-finals where they will face Bangladesh, but victory marked a 10th successive win in World Cup matches.

Left-hander Raina, who reached his century in 94 balls, was gifted a lifeline on 47 when Zimbabwe all-rounder Hamilton Masakadza dropped a simple chance.

His error at short fine leg from a top-edged sweep shot came with India's reply in the balance at 157-4.

India were already guaranteed to finish top of Pool B and wrapped up their sixth win from six matches, but defeat for Zimbabwe meant their World Cup campaign concluded with only one win from six.

India captain MS Dhoni, who won the toss and elected to field, admitted it had been a good test for his side ahead of the knock-out stages.

"The wicket was doing a bit in the second innings and the Zimbabwean bowlers exploited that well, with slow bowling," he said.

"Raina is a key player for us and the partnership we put on was very good.

"Everyone has performed under pressure so this is looking good and all our batsmen have had a bat."

Zimbabwe wicketkeeper Taylor's brilliant century came in his final outing for his country, having elected to join Nottinghamshire on a Kolpak contract for the forthcoming English county season.

The 29-year-old smashed 15 fours and five sixes in his stay at the crease to ensure Zimbabwe recovered from a sluggish start to post 287.

It was the right-hander's second century in the tournament, having scored 121 against Ireland in their previous match. 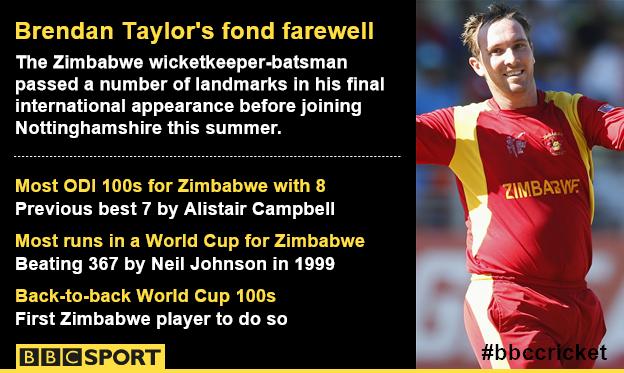 "Getting 100 in a World Cup for your country is always special, but they would have been a lot sweeter if we'd got over the line," he said.

"It's been a thrilling ride in international cricket and one I've thoroughly enjoyed.

"We played some brilliant cricket in this World Cup, but we have been shoddy at times."

Sean Williams entertained with 50 in a 97-run partnership for the fourth wicket with Taylor before he fell to a sharp return catch from Ravichandran Ashwin.

India's reply faltered with the loss of openers Rohit Sharma and Shikhar Dhawan in the space of five balls.

Ajinkya Rahane was narrowly run out by a smart throw from Raza before Virat Kohli deflected a sweep shot on to his stumps to leave them behind the required rate at 97-4.

But, barring Raina's escape at the hands of Masakadza, India were largely untroubled as he and Dhoni punished a threadbare Zimbabwe bowling attack to complete victory with eight balls to spare.