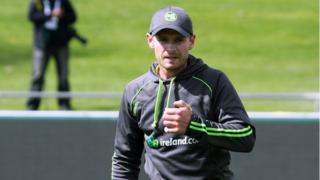 Ireland captain William Porterfield says his side put in some "fantastic performances" at the World Cup despite going out of the tournament after the pool stages on run rate.

A seven-wicket defeat by Pakistan ensured Ireland's departure from the tournament.

"Both batsmen and bowlers did well - we've shown we deserve to be here and deserve credit for how we've played in this competition," said Porterfield.